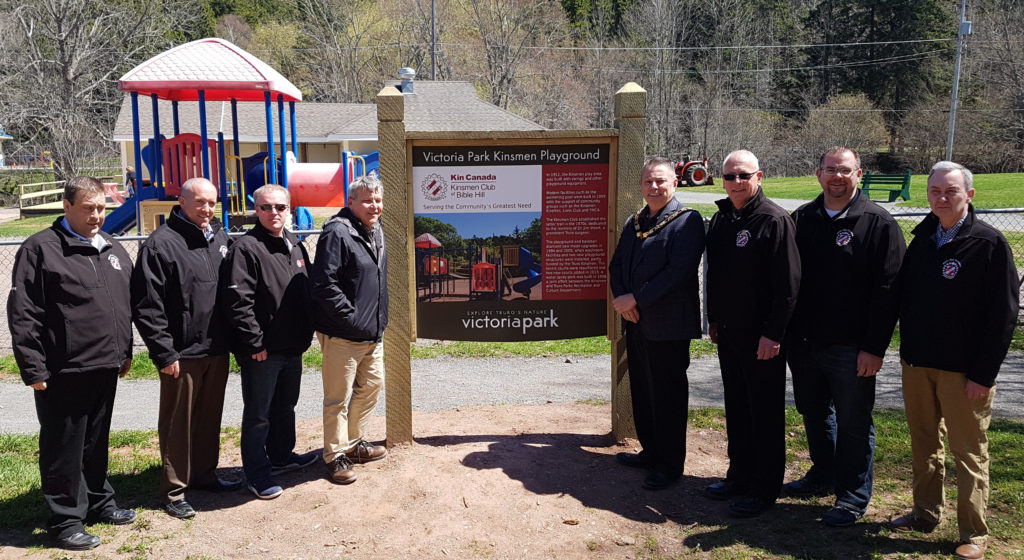 A sign was recently installed to recognize the Victoria Park Kinsmen Playground. Truro Mayor Bill Mills and Kin Canada National President James Doerr were on hand with a number of Kinsmen for an official unveiling on Thursday.

The Kinsmen Club of Bible Hill is in the middle of a five-year, $25,000 commitment for playground upgrades in Victoria Park. Kinsmen, both the club in Bible Hill and Truro before them, have long supported the park.

The play area was built in 1952 with swings and other equipment. Modern facilities, such as the swimming pool, were built in 1959 with the support of a number of local groups. The Dr. Jim Vibert Trail, dedicated after the prominent Truro surgeon, was established by the Kinsmen in the 1970s.

More recently, the playground and baseball diamond saw major upgrades in 1994 and 2000, when washrooms and new playground equipment was installed. That work was partly funded by the Truro Kinsmen. A joint effort between the Kinsmen and the town led to the addition of the water spray park.

It’s just one way the Kinsmen Club of Bible Hill is able to fulfill its motto of “Serving the Community’s Greatest Need”.

The 2022 Fall Leadership Conference registration form is now available on our District 7 Kin Website under the District Events Tab. This year's FLC "Look What We Can Do in 2022" is being hosted by the Kin Club of Florenceville at the Amsterdam Inn & Suites October 27th - 30th, 2022.The Official Call will be distributed by August 27th. district7kin.ca/wp-content/uploads/2022/08/FLC-2022-Registration-Form-Editable.pdf ... See MoreSee Less

REMINDER...Town Hall Meeting Regarding the 2022/23 Proposed National BudgetTo provide the membership with the opportunity to discuss the proposed national budget in advance of National Convention, all active members are invited to attend a Town Hall Meeting on August 3, 2022 at 8:00 p.m. EDT.The Zoom link to attend is: us02web.zoom.us/j/86732431155.Registration is not required. The meeting will be recorded for members who are unable to attend.As you may recall, the 2022/23 Proposed National Budget and an explanation document with notes on the plan (titled "The Road Ahead") were circulated to all members on May 20, 2022.A number of questions were raised by members at the 2022 District Conventions. From those inquiries, we have created a Frequently Asked Questions document to ensure all members have access to the answers.All of these documents were emailed out to all members most recently on July 25, 2022 and can also be found on iKin.We look forward to answering any of your budget questions in advance of National Convention. ... See MoreSee Less

Zoom is the leader in modern enterprise video communications, with an easy, reliable cloud platform for video and audio conferencing, chat, and webinars across mobile, desktop, and room systems. Zoom ...
View on Facebook
· Share

It is with great Sadness we announce the passing of Kin Perry Kohler, of the Bible Hill Kinsmen Club. Donations can be made to the Kinsmen Club of Bible Hill or the local food bank.Perry's celebration will take place Friday evening at the Truro Fire Hall. Any Kin who knew Perry are welcome to attend his celebration of life.Attached is the link to Perry's obituary. colchesterfuneral.frontrunnerpro.com/book-of-memories/4975514/Kohler-Perry/obituary.phpHappy to meet, Sorry to part. ... See MoreSee Less

Kohler, Perry Norman. April 29, 1977 - July 9, 2022. It is with great sorrow we announce the unexpected passing of Perry Norman Kohler after undergoing heart surgery in the QEII, Halifax. Perry was bo...
View on Facebook
· Share