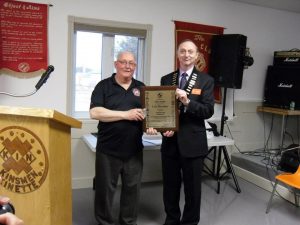 Life Membership is the highest award that the Kinsmen Club of Canada can bestow upon a member. Since the club was founded in Botwood in 1974, this is only the fourth time for a member to be installed as a life member.

Wilson joined Kinsmen in 1977 and has served on all executive positions during those 40 years. During his years with the organization, Wilson has served as president and has served in all other capacities throughout the years. He has also chaired many project during his time with the club. There hasn’t been a year that he hasn’t been on the executive. He is now serving as secretary a position he has had many times.

Wils has also served on the Zone executive. He has received Kinsmen of the year three times. In 2015 he received the Town of Botwood’s volunteer of the year award.

As you can imagine its impossible to list all the awards he has won over this long period of serving the communities greatest need.

Anyone who knows Wils, knows that he doesn’t do it for the recognition. Wils takes pride in the club’s motto: Serving the community’s greatest needs. Wils is helping to make the world a better place.

Not only does Wilson volunteer with Kinsmen he has also volunteered at the Twomey Health Centre cooking when they have special events. He was a beaver and cub leader. He prepares the annual Christmas Senior’s dinner which the Kinsmen run every year. Wils also helps with the Christmas dinner at the United Church. He is an active participate at our Seaport Festival Celebrations. He has coached the High School hockey team for many years. He has coached in the Minor Hockey program. He helps the United Church with their fund-raising.   He is also a leader in the United Church of Botwood serving as secretary and chair of Missions and Service. He assists in the preparation of meals at the Breakfast Program at our schools. He offers his service to the Royal Canadian Legion.   The youth in our town like the Boys and Girls Club call on Wilson for help with their fund-raising activities. When anyone thinks of Kinsmen in Botwood, they think of Wils.

As you can see from the above list, Wilson has always been there when called on to lend a helping hand. Our club and community are much richer for his volunteer work. His contribution of voluntary time over the years has been enormous.   On behalf of the Botwood Kinsmen Club we would like to say Thank You Life Member Wils.

FLC - Heads up!!The D7 2021 Virtual FLC will take place on Microsoft Teams on Sat 23rd Oct. Credentials will start at 1 pm and call to order will be at 2pm.Governor Bill will be sending out the link to your DGs later today so be on the lookout for an email from him/her with the link and telephone number to join..Hope to see you all at FLC on Oct 23!! ... See MoreSee Less
View on Facebook
· Share

Fellow Kin, As the COVID-19 pandemic continues, the blood community applauds those individuals who have selflessly responded to the call for blood donations during this time. Since blood has a limited shelf life, the need for blood donors always exists. The need for blood donations from individual volunteers will remain throughout the pandemic to continually replenish the blood supply and ensure availability for patients in need.Whether you have given blood before or not, you can register with your Kin District ID # (KINC110265) to contribute to District 7 yearly pledge. CBS has made it easy for anyone to register. You can just click on the link below to register for your District. This will create a CBS account for you or link the ID to your existing account. You only need to register once and all your donation will be counted towards the District 7 pledge.All blood types are needed and everyone who is able to are encouraged to donate. Spread the word to family members, friends, or colleague to book an appointment and donate with you. This is a great no cost project and one that every club can participate in.Register Here: blood.ca/en/ways-donate/donate-partner/becoming-partner/team-member-registration Patrick R BowersKin Canada Atlantic D7District Service DirectorThe Best Way to Predict the Future is to Create It ... See MoreSee Less