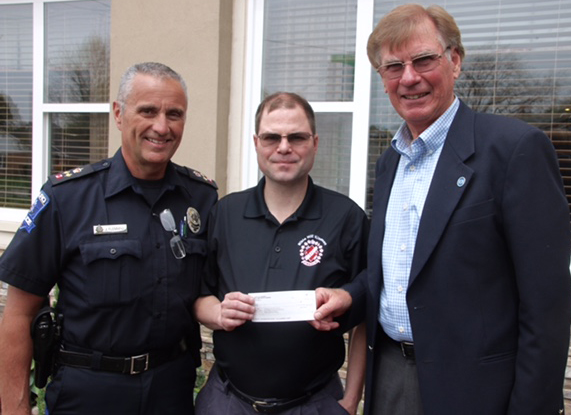 The 2nd Annual Colchester Book Fair was a big success last month, and the Kinsmen Club of Bible Hill was recently able to present a cheque for $2,000 to the Colchester East Hants VON, the main benefactor of the event. Kinsmen member Stephen Hamlin attended the group’s Volunteer Appreciation Luncheon on the club’s behalf, and also received a Certificate of Recognition for the club from the VON. 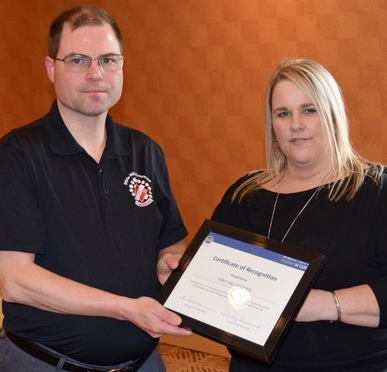 The remaining money raised by the book fair will be distributed throughout the community to various groups and organizations supported by the Kinsmen Club of Bible Hill.

Hi Fellow Kin,If you didn’t already know, May 1st is the start of Cystic Fibrosis Awareness Month. This month means so much to the CF Community as it brings much needed awareness to their cause and is also when CF Canada holds The Walk to Make CF History, its’ biggest fundraiser of the year. The Registry stats we are sharing shows a variety of health outcomes for people living with cystic fibrosis across the country. Kin Canada is committed to our CF partnership and the CF Walk is a big part of where our partnership dollars are raised! Please consider joining our District Challenge by either signing up for your local walk or virtually to your District Team. Share pics, showing what you love to do and make a difference for CF. If you are not directly participating, you can donate individually or as a club to your local District to help us with our District Challenge goals while we go #FurtherTogether for CF. Visit walk.cysticfibrosis.ca to register or donate. If your club would like to support with a cheque reach out to your local District Service Director and we will give you the address to send it to.Regards,Janice Janice Daniels | Regional Manager, Fund Development – PrairiesCystic Fibrosis CanadaBox 3088, 309 4th Ave. N | Saskatoon, SK S7K 2L8 Tel: (866) 420-6584 ext. 603| Direct: (306) 518-1397www.cysticfibrosis.ca ... See MoreSee Less
View on Facebook
· Share

Hello, Fellow Kin:Below is an update on the progress and current activities of the Kin Canada Building Task Force (BTF).Recently, the BTF completed the data analysis phase of our review of the Kin Canada Building. We are now moving onto exploring alternative spaces that could reasonably accommodate our Association’s operations if needed. We have identified six options that could potentially be suitable alternatives based on location, square footage, price, amenities, and other factors. We are currently also in the process of drafting a detailed report that will provide a comprehensive analysis of all our findings to date. The analysis will include estimated total costs for each of the options we have explored. The analysis will also clearly indicate total and per member costs, so all members can see how their dues would be impacted in the various scenarios presented by the BTF. The interim report will be forwarded to the National Board of Directors in April 2022, and we expect that the document will be in the hands of the membership by early May 2022. The full report, an executive summary, and a PowerPoint presentation will be ready for consideration at each District Conference. A member of the BTF will be available (either remotely or in-person) to address any questions that may be asked by members attending the District Conferences. As mentioned in our previous update, feedback from District Conferences will be incorporated into a final report. The final report will be distributed to all members in advance of 2022 National Convention. The BTF will ensure members and clubs receive the report in time for full consideration as a club. Our goal is that all Accredited Delegates feel ready to vote on a “go-forward” decision in August 2022. Please feel free to address any concerns you may have to Guy Smith (hqtaskforce@kincanada.ca), who is looking after the communications aspect of the BTF’s activities. He will direct any enquiries to the appropriate BTF member for review and response. Darrell Cooper, Project ManagerKin Canada Building Task Force ... See MoreSee Less

This year to start the Kin Challenge we have set up a District 7 Virtual TeamKin can sign up as a club or as an individual and it doesn’t matter where they are in the district as it is a virtual team, they will have the option to sign up for a walk near them and still be a part of the virtual team as well.the link to the D7 page is below:my.crowdchange.ca/kj64biWe are walking #FurtherTogether as a team this year at the Walk to Make Cystic Fibrosis History to raise funds and awareness for everyone impacted by cystic fibrosis.Through the power of our CF community, we will continue to go further in accessing critical medicines. Further in fueling innovative research. Further in ensuring the care and support needed is available. Further in our fundraising. Further to lengthen life-spans and improve lives.Together, with your support, we go further. Always!Please donate today to help us reach our goal and to help us improve the lives of all that are impacted by cystic fibrosis.Patrick R BowersKin Canada Atlantic D7District Service Director ... See MoreSee Less

I am participating in the 2022 Walk to Make Cystic Fibrosis History alongside thousands of walkers from 70+ communities across Canada. We will go #FurtherTogether
View on Facebook
· Share